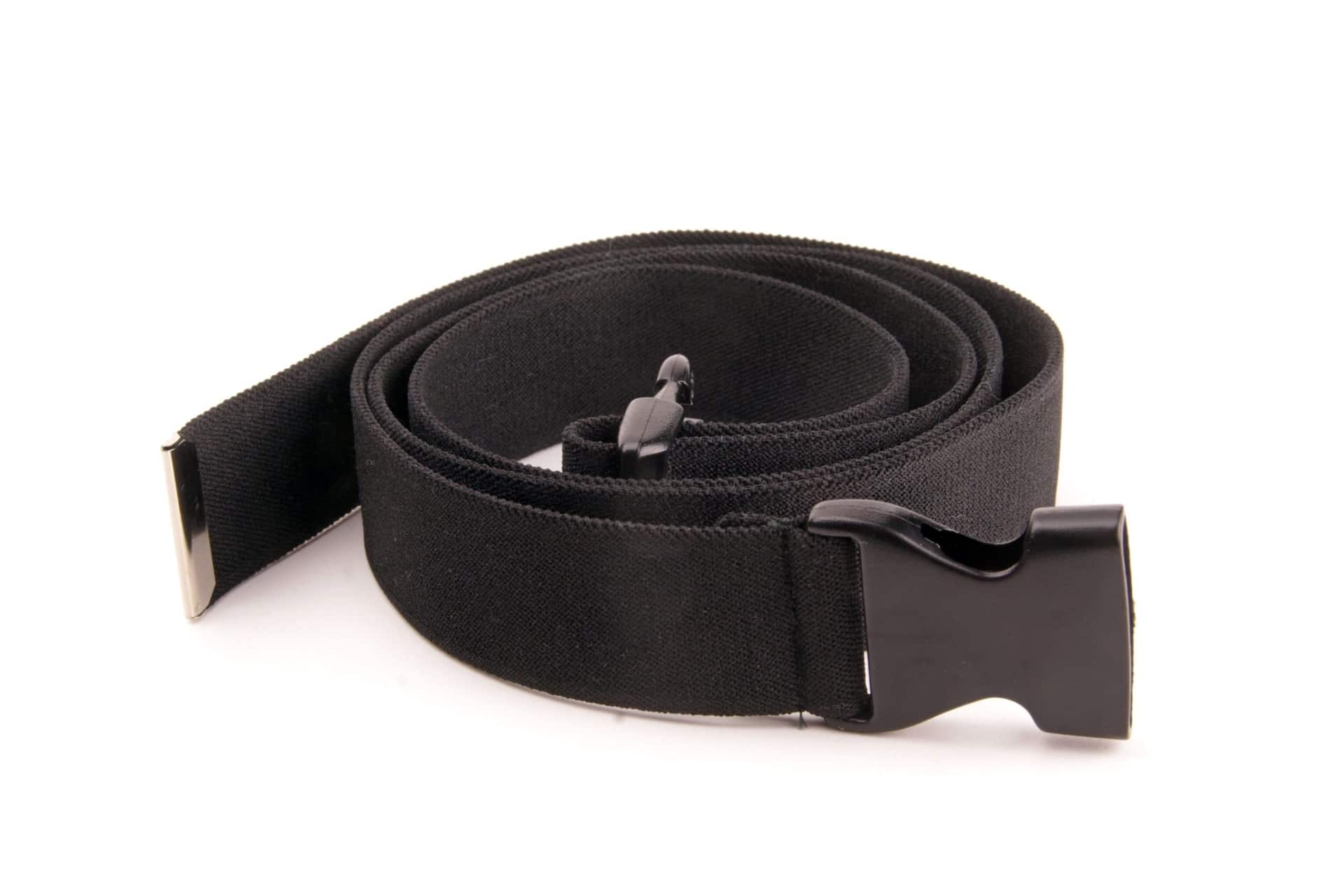 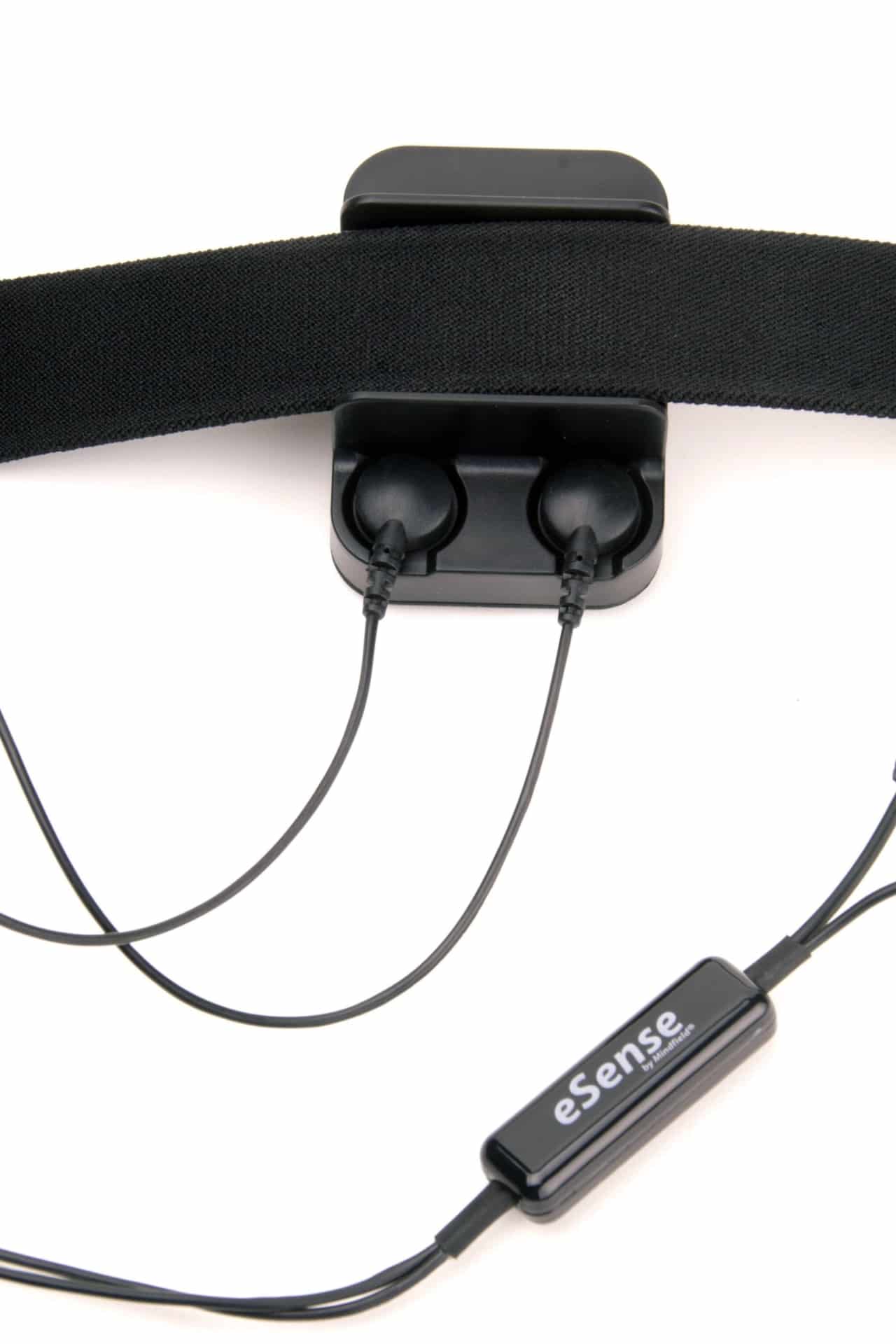 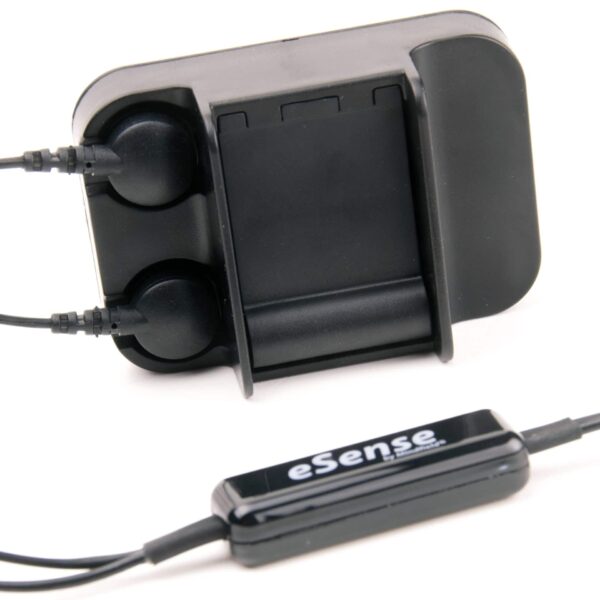 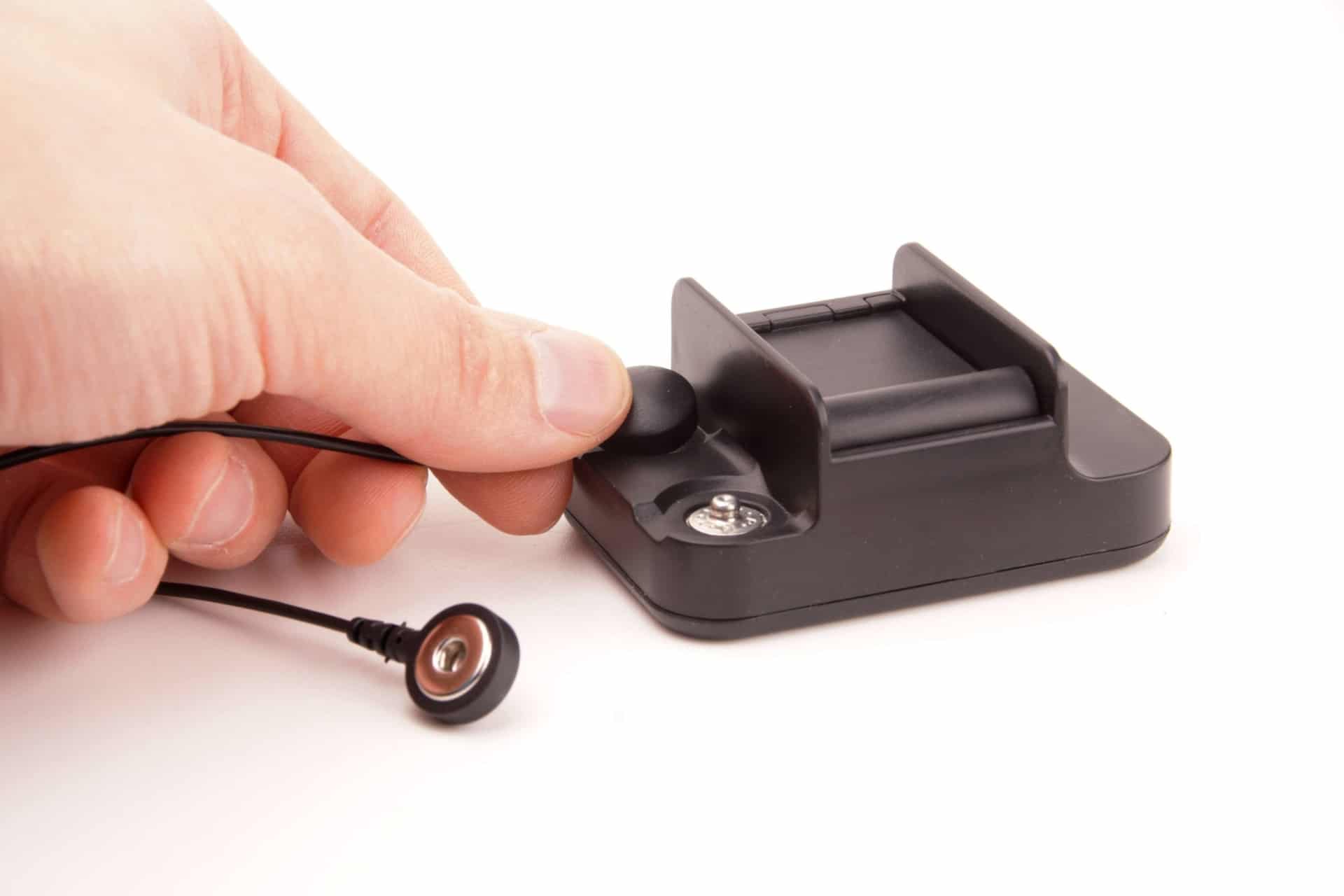 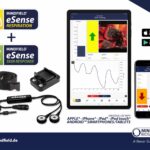 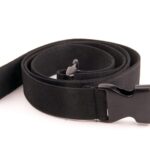 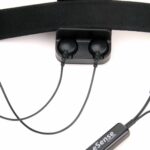 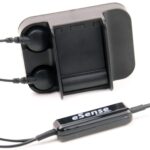 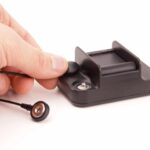 The eSense Skin Response is available as a bundle with the eSense Respiration discounted in this set. With this set you save 30 euros compared to the single purchase of both devices.

If you already have an eSense Skin Response, you can also purchase only the eSense Respiration here.

The eSense Skin Response is available as a bundle with the eSense Respiration discounted in this set. With this set you save 30 euros compared to the single purchase of both devices.

If you already have an eSense Skin Response, you can also purchase only the eSense Respiration here.

Biofeedback with the eSense Respiration and eSense Skin Response

The Mindfield eSense Respiration is a handy sensor for measuring breathing. The transfer of data via the microphone input to your smartphone or tablet. Android and Apple iOS are supported. This allows a breath-biofeedback training, which they can perform independently, pleasant, almost anywhere.

In this set you also get the eSense Skin Response. The Skin Response is a sensor for measuring skin conductance via the microphone input of a smartphone or tablet (Android and Apple iOS).

You can use the respiration in conjunction with the eSense, but you can also use the eSense Skin Response alone. So you get two devices in one set.

Biofeedback with the eSense Respiration

Introduction to eSense Respiration Biofeedback breathing training with eSense Respiration is about observing your breathing through changing bars, curves, music, sounds, vibrations, light from light bulbs, and more. This gives your consciousness a new perspective on breathing, selfperception is trained, and a feedback cycle is created.

But it is also about the change of the breathing, towards a slower, deep abdominal breathing, which has many positive effects and can be trained by a breathing target in our app. We combine the measurement and feedback of breathing in the eSense App with guided relaxation exercises, guided breathing exercises and meditation and offer you a total experience beyond biofeedback. In addition to extensive feedback variants, you can evaluate your measurements with many statistics, document your progress and export the recordings as CSV and PDF files. Your data belongs only to you! You have full access to the raw data.

Biofeedback with the eSense Skin Response

Your skin conductance depends directly on your state of relaxation or stress, making it a commonly used and very precise stress indicator. With the eSense Skin Response, you can precisely identify your stress level and reduce it with biofeedback training.

The eSense provides you in various ways with exact feedback about your momentary stress level, e.g. with measurement curves, video display and audio feedback features.

For the audio biofeedback, the eSense now has a headphone jack, so you can additionaly listen to music or audio books while training your stress level down!

The eSense Respiration can be combined with the eSense Pulse and used simultaneously. Your breathing is a stimulator for your heartbeat and therefore combining both eSense sensors can take your training to the next level.

Included with the eSense Skin Response and Respiration Bundle

With the eSense you can…

Which iOS Devices are Supported?

Which Android Devices are Supported?

The eSense comes with the eSense app which you can load for free in the in the Google Play Store (Android) or in the Apple App Store (iOS). The app contains a variety of functions for an effective biofeedback training in a modern design. Essential function are the display of the measured values app as bargraph and oscilloscope, a feedback by video, music, tones, vibration and new: by light via a bluetooth smart bulb.

Additionally you can also create own apps with our SDK. We also have developed an own eSense Web App with which you can stream your measured values to a PC.

Video of the eSense Mobile App

Video of the eSense Web App

Our state of mind is reflected in our breathing. If we are pleased or tense, we usually breathe quickly, irregularly and flatly. Positive as well as negative stress is reflected in this way. If, on the other hand, we are relaxed and calm or sleepy, our breathing is usually slow, even and deep.

Breathing has a special role in biofeedback in that we can consciously control this parameter. In everyday life we rarely think of our breathing and breathe almost exclusively unconsciously. If our unconscious breathing patterns are disturbed by chronic stress, pain or other psychological or physical stresses, this often leads to discomfort and the maintenance of stress. With breathing training, you can train and improve your breathing, achieve deep relaxation states and significantly increase your general well-being. Breathing therefore plays an important role in almost all relaxation techniques such as autogenic training, yoga, meditation and progressive muscle relaxation.

When measuring the respiration, there are two main measurements; The Respiration Amplitude (RA) and the breathing frequency, breaths per minute. The Respiration is special, as in contrast to other biofeedbackparameters it can be controlled consciously. This means that biofeedback respiration training is especially suited for beginners.

Breathing is directly under our control. This is a reason why all other the world well known relaxation technics contain the observation and the control of our breath. Direct biofeedback of breathing; i.e., real-time feedback of breathing pattern, depth and frequency helps our consciousness to achieve new, better breathing patterns faster and more precisely than without biofeedback.

The focus on feedback prevents the otherwise so frequent drift in thoughts and loss of concentration on breathing. Many meditation techniques involve the observation of breathing, which is very difficult for many beginners. Breathing biofeedback makes this entry much easier. Frequently, feedback alone is enough without specifications, and the user automatically breathes more calmly and evenly. In addition to this measurement and feedback, it is also possible to specify how the user should breathe. The app includes a breathing aid for this purpose.

If Heart rate variability training is included, the eSense App offers various ways to visualize it and to define respiration in a certain rhythm. The coupling of heartbeat and respiration is greatest in most people when breathing at about 4.5 to 6.5 breaths per minute. This helpes the HRV training and makes it a lot more easier than without respiration support.

The eSense Respiration with the App offers you

Skin response, also known as galvanic skin response (GSR), electrodermal response (EDR) or skin conductance (SC) is a method for measuring the skin’s electrical conductance, which varies with its moisture level. Conductance is measured in µSiemens (µS) and is the inverse of electrical resistance.

Significance of Skin Conductance and Biofeedback-Training

In a professional, therapeutic context, skin conductance training is the preferred biofeedback training method for anxiety, panic and learning relaxation.

The sweat glands are controlled by the vegetative (sympathetic) nervous system and react directly to the smallest emotional, physical or mental changes. A rise in skin conductance is clearly visible under the influence of stress. Stress factors may be, for example, mental activity, emotional arousal, deep inhalation or frightening.

Even the smallest changes are made visible with the aid of the app, and can be used for biofeedback training to reduce stress.

A detailed introduction is included in the free app.

Possibilities of the App

To train and improve your breathing, the app offers a wealth of biofeedback feedback:

The price of the eSense includes in parts the hardware and also the software (the eSense app) all in once. We spend huge amounts of money for the programming and continuous development of the app. However, the eSense app is available for free in the App Stores. Our customers should not pay twice at different locations and, moreover, it is unusual for most people to pay a larger sum for an app. The eSense offers unbeatable value for your money and is a unique, high-precision biofeedback device with many features.

A Procedure consists of several assembled modules. With this feature of our eSense app you can build the perfect individual relaxation guide, a stress test, a predefined biofeedback training or use it for research.

There are many possibilities. During a procedure, your skin response, respectively or temperature (depending on the eSense sensor you have) will be recorded and afterwards you see your results for each module and in total.

The eSense app can support biofeedback via smart bulbs. Smart bulbs can change their colors and brightness and can be controlled via Bluetooth. In combination with the eSense app this enables you to the light from the bulb as an indicator of your level of stress or relaxation. 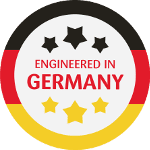 The eSense is completely engineered at Mindfield in Germany.

Which iOS Devices are Supported?

My eSense does not work with iOS 7 (or higher)

Which Android Devices are Supported?

Is there a way to extend the cord of the eSense?

You can see our full FAQ here:

There are no reviews yet.

Show reviews in all languages (5)

You've just added this product to the cart:
[]